The Museum of Everything

If you find yourself roaming around picturesque Primrose Hill having exhausted the posh boutiques and gorgeous delis, then may I suggest you turn off Regents Park Road into Sharples Hall Street. You'll find a small entrance into a non-descript courtyard, at the end of which is an illuminated sign revealing you've arrived at The Museum of Everything. 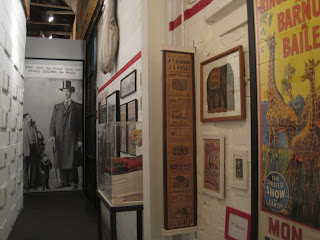 The current exhibition is simply called Exhibition #3 which due to popular demand has been extended until mid-February (so hurry!)  I'm not entirely sure how to describe this exhibition, apart from the fact it is definitely peculiar with a hefty pinch of bonkers.  One of the geniuses (or is that genii) behind this installation is none other than Sir Peter Blake, British Pop Artist extraordinaire (he designed the album sleeve for The Beatles' album 'Sergeant Pepper's Lonely Hearts Club Band' don't you know). As well as being an artist, he is a huge collector of interesting art and extraordinary artefacts, many of which are displayed. 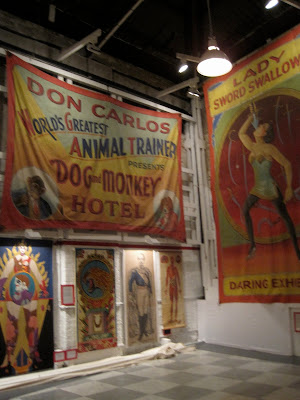 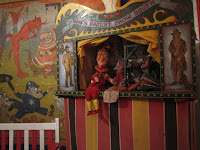 The feel of the place is unpretentious and fun, like being encapsulated in a giant, colourful illustration. Almost dream-like, you find yourself following a route which takes you on a nostalgic adventure involving wonky fairground mirrors; a room made entirely of seashells; a corridor full of posters and photographs dedicated to circus freaks gone-by including famous bearded ladies, midgets and giants; old Americana posters promoting sword swallowers and animal trainers sway from a high vaulted ceiling, plus Punch, Judy and a motley crew of other familiar marionettes.

Upstairs leads to a room devoted to a stunning collection of miniature fairground rides created by Arthur Windley, a retired Norfolk farmer who spent 40 years making them by hand with such wonderful attention to every minute detail.  They are still all in proper working order and you can witness all the fun of the fair every fifteen minutes. He sold the collection in 2010.

There's an entire area representing Walter Potter's Museum of Curiousity - he was a reknown Victorian taxidermist and there are various glass cabinets displaying intriguing dioramas of stuffed woodland creatures, often wearing costumes and posing as humans in a whimsical fashion.  A multitude of sophisticated squirrels and posh rats (at least I think they were rats) chatting, drinking tea, playing cards and even knocking each other out in the boxing ring.  It's all a strange sight to behold.  A dark version of the Sylvanian Family if you will.  And as for the two-headed lamb. Well! 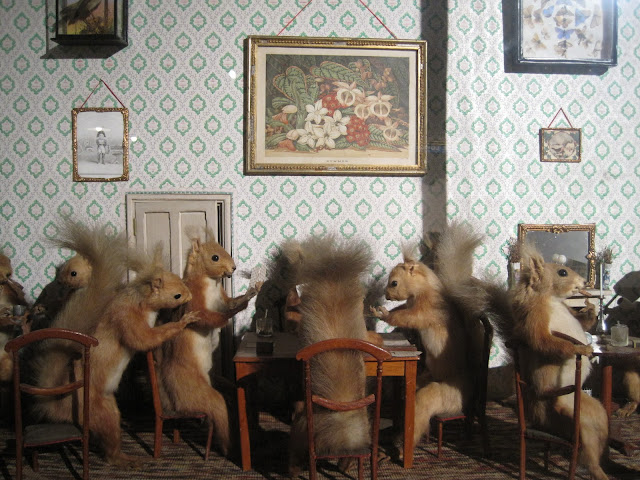 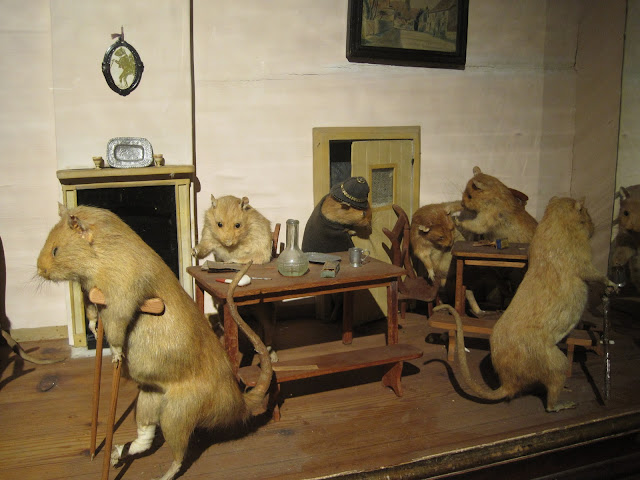 So, once you've found your way around that fascinating lot, you finally end up back at the beginning, in the museum's little bookshop/cafe area where you can treat yourself to a large souvenir badge, a cup of tea and a plate of jammy dodgers whilst absorbing all the strange curiousities you've just encountered.

The Museum of Everything really is delightful and as the end of Exhibition #3 draws near, I urge you to see it for yourself. Entrance is free (a £3 donation is suggested) and photography apparently faces a penalty of £1000 which increases to being punishable by death!  Which I assume was part of the humour. If not, I hope you appreciate these pictures, as I'm now living in fear of being attacked by a legion of axe-wielding midgets and stuffed squirrels! 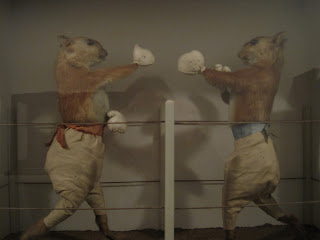 Email ThisBlogThis!Share to TwitterShare to FacebookShare to Pinterest
Labels: Museum of Everything, Sir Peter Blake

I will bring my sister in law for sure. She is coming over from the states and would love it.

Great, have fun and let me know what you think!

A friend of mine recently did beautiful store displays with stuffed squirrels - she will love this! Tamsin x

I don't know how you find out about these things, but I'm glad you do! Beautifully written too! x

I'm definitely going to see the stuffed squirrels! Great post Immy .... I really don't know how the hell you find these places but keep them coming ...!

I can't wait to go to see this. I used to know James Brett - the founder of this, and went to his Mid summer's parties on Primrose Hill with a whole circus, including fire fighters, dwarfs and free food and drink! It was amazing and creates many wonderful memories for me and my friends.

James has done many things like being a keyboard player to film maker, but I think this is wonderful - he found what to do with all his stuff!

What a curious place to be sure! great blog Imm look forward to some more hidden odd spots
Roz x