Meateasy (aka The Meat Wagon)

Oh my!  It's not often I write about something within moments of having been there, but having just returned from Meateasy, I thought the best way to wait for the 'mother of all burgers' to digest, would be to blog about it.  If you've kept an eye on my 'This Week's Special' page, you will know all about Meateasy and The Meat Wagon. But for those of you who haven't got a clue, then listen up! 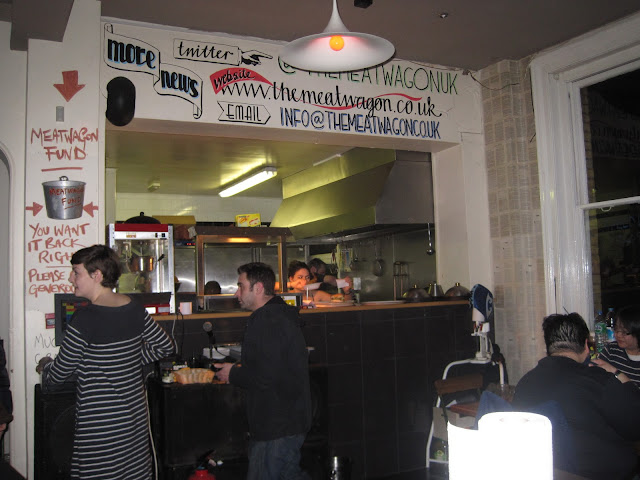 In a nutshell, there's this cool guy called Yianni Papoutsis who had a shiny burger van he called The Meat Wagon, from which he would sell the most excellent burgers in all the land.  But alas, last December, some mean crooks nicked his beloved wagon from its home in Peckham ('nuff said) and our wagon-less Burger Buddy was at a very loose end.  But life has a funny way of working itself out and it would seem those wagon-pinching numpties actually did our hero a favour.  Because when Yianni was devising a plan on how to save enough money to buy another wagon, a terrific 'lightbulb' moment dawned on him.  He would sell his infamous burgers from a speakeasy type venue which he found in the perfect place above an old pub in New Cross, SE14. And thus, Meateasy was born. 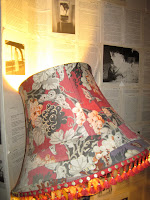 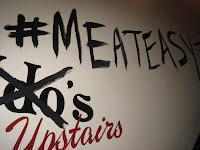 Above The Goldsmith's Tavern (currently being refurbished and soon to become New Cross House) on New Cross Road, you will find Meateasy, discreetly tucked away in true speakeasy style, through an unsuspecting side door and up some stairs clad in garish threadbare carpeting. Once inside, it's like entering burger Narnia, as if everyone in there knows something which the passers-by on the street below are simply oblivious to. It's a good feeling. Even when I arrive at 6pm, the place is already heaving. The crowd is a real mixture of all ages and walks of life from carefree students to wisened professionals. But all united with the same goal - to experience a Meateasy burger. Feverish excitement and anticipation is written on everyone's hungry lips. Meateasy operate a ticket service, so while I waited for my number to come up, I found a seat (table sharing is absolutely the norm here) and took everything in around me. Decor-wise, Meateasy is very cosy and down to earth, the walls are decorated with endless book pages, low-watt coloured lighting, vintage lampshades and a random mixture of tables and chairs.  There's a well-stocked bar on one side which even sells bottles of Meateasy beer!  Music plays unobtrusively in the background, drowned out by the humming chatter. 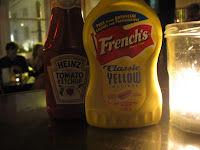 Once I place my order, it's a short wait until my name is called above the din, and it's time to tuck in.  The food is served on paper plates with hefty quantities of kitchen roll and is all part of the wonderful, unpretentious vibe.  I ordered a bacon cheeseburger with coleslaw and onion rings.  To be honest, the 'slaw' and rings weren't much to write home about.  But the burger... Well, that was absolutely magnificent.  Made with 28 day dry-aged beef, the hunk of a patty is just as a burger should be.  Positioned between a homemade soft sourdough bun with generous additions of gherkin, lettuce, onion, cheese, bacon and mustard, it was a proper, sloppy delight. 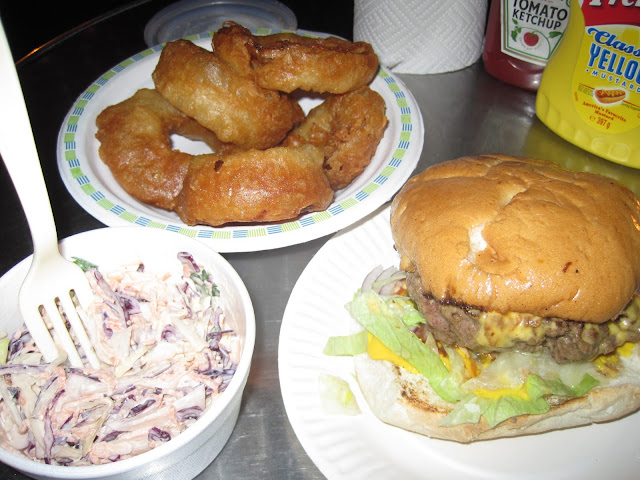 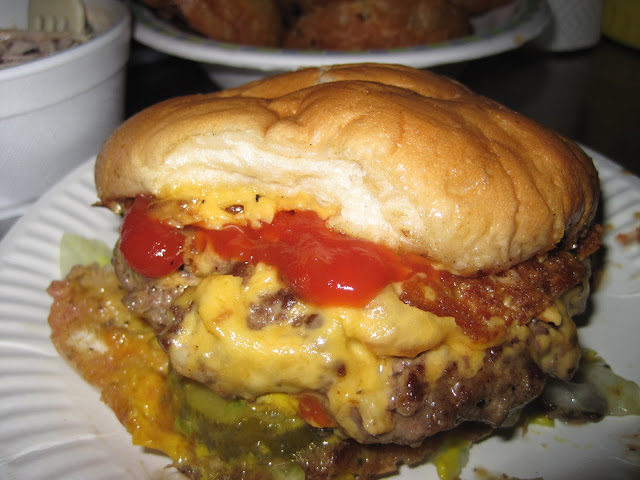 If for some peculiar reason, burgers aren't your thing, then there are a host of other things on the chalkboard menu for you to choose from, including Mac & Cheese, Chilli Cheese Dog and a Philly Cheese Steak Roll, which all looked equally delicious.  Note: Meateasy probably isn't a popular veggie hangout! Price-wise it's very reasonable, you're looking at around seven quid for a burger plus three quid for fries. It's open 6pm - 11pm Tue - Sat and is due to stay at its current location until at least mid-March. But fingers tightly crossed that as Meateasy has been filled to the rafters day in, day out since it opened in January, hopefully Yianni will be feeling the love so much, that he will make it a permanent fixture (Yianni, are you listening?!)  It's by far the best burger joint in South East London and has definitely put New Cross on the map, as people are venturing far and wide to try out this little corner of meat heaven. 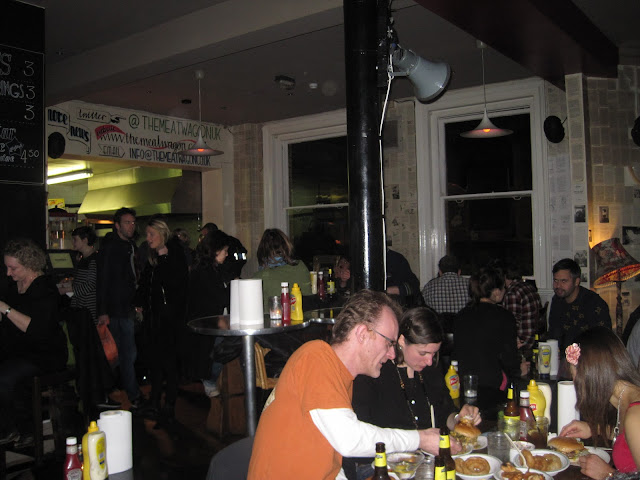 Yianni's initial aim was to make enough money to buy another wagon, but I reckon he's doing so well, he could buy a fleet of diamond-encrusted wagons at the rate he's going.  The return of The Meat Wagon would be cool for festivals and random London roaming in the summer months, but I do hope its return won't be the Meateasy's demise.  Surely it's only fair we have both!  I am very fortunate to live in New Cross (I never thought I'd hear myself say that!), and as Meateasy is at the end of my road, I for one will be petitioning for it to stay put.  And to open on Sundays would be good too, as it would go oh so well with the papers and a Bloody Mary.  Let's just hope the New Cross House pub is also a winner when it opens in spring.  In the meantime, I strongly urge you to get yourself to Meateasy whilst you can. 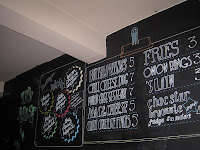 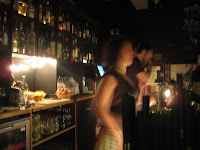 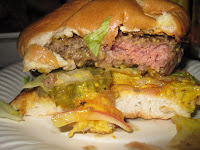 ImmyP ... My mouth is watering for a Meateasy burger. Yet another thing 'to do' on my visit to London. Keep on blogging :) Lotsoflovolav xx

I can't believe I came to your house on the day it wasn't open. I am not a burger person but until I've seen these pictures, I may have changed my mind. I think I don't like posh burgers and this looks like a proper burger that I would love to devour - am coming over again, not on a Sunday so we can go together x

So many places 'think' they do great burgers but not many actually do. I'm convinced enough that I am going to have to venture south of the river to try this place! Thank you!

Having just come back from NYC, the home of many a good burger, I was lucky enough to try one from 'Shake Shack' supposedly the best in town and I wasn't disappointed...having not tried the above just yet...it certainly looks the same as those from across the pond. I will definitely make the trip all the way down from the safe haven of W4 just to try it.
Si xx

This is a truly mouth watering, scrummy type of places to go to.. Next time I'm up, I know where to go!

I was never tempted to try his burgers when he had the wagon. I think it was the 2 hour wait that just really put me off.
Maybe if he had a fleet of them, then maybe ....

would love you to enter my amazing giveaway for a free meal at IDA restaurant:

Really wanted to try this, now even more after looking at this pics... yum

I thought you were going last night with Luiz? You must go and we should take Uyen! xx