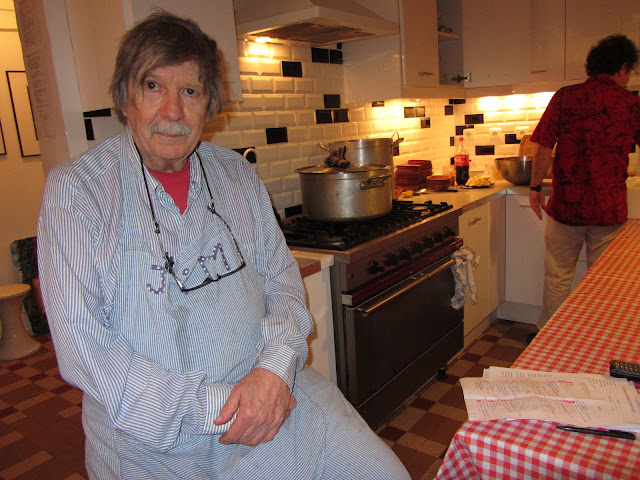 Have you ever really looked forward to something so much, but once you finally got there, found it to be a massive disappointment? Well, that's how I felt when I went to Jim Haynes' supper club in Paris last Sunday. As a blogger, my opinions are always my own, and I feel it is imperative that I write honestly about places I feature, even if it's not always favourable. Which I'm afraid is the case here.

Hailing from Louisiana, Jim Haynes was a bit of a legend in his heyday, and was a leading figure in the underground and alternative culture scene in London during the 1960's. Jim moved to Paris in the 1970's and set up his Sunday night supper club which he still hosts every Sunday, inviting strangers from all over the world to partake in food, drink and conversation in the courtyard of his artist's home in Paris. I remember reading about his idyllic-sounding dinners years ago and kept thinking, I must go to Paris and meet this Jim as he sounds like a real character.  So I finally made a plan and worked it around a surprise trip for my mum, taking her to Paris last Sunday as an early birthday treat. Dinner at Jim's was to be le pièce de résistance of the weekend. But sadly, it was more of le grande flop! 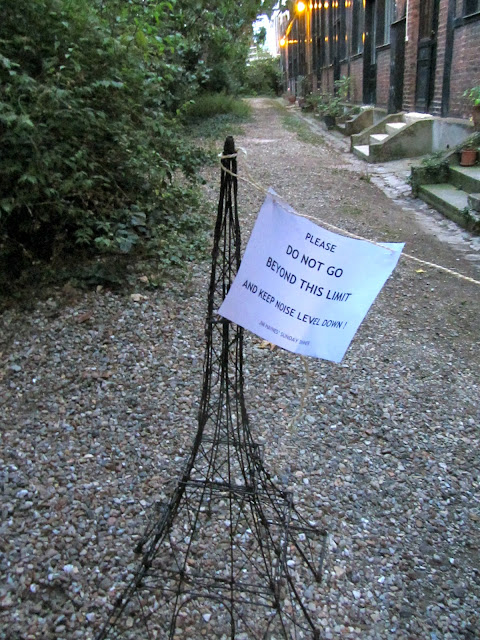 We arrived at 8pm sharp, armed with curiousity, excitement and a big appetite. Jim's pad is one of many lovely ateliers positioned in a neat row, tucked away behind a discreet gate which share a leafy, gravelled courtyard. Luckily it was a warm, balmy evening so the majority of the guests mingled outside. The inside space is pretty small with a limited seating area so with around 50 guests arriving for dinner, it really is a case of first come, first served on the pew front.  Jim was perched on a stool where he greeted his guests one by one with a warm smile, ticked their names off the list and collected their discreet envelopes containing payment. €30 is the suggested amount per person, but he's happy to accept more or less. In retrospect I wish I'd gone for the latter...

Once you've checked in, it's up to you to make yourself at home, help yourself to a drink and get mingling. So far, so good. A bank of wine boxes (most of which were empty) lined the 'bar' area of the kitchen, but mum and I soon found a box of red in the garden 'bar' and poured ourselves a glass. France is one country where you can buy very quaffable Vin du Plonk for just a few euros. And then there's the really cheap stuff which is what we found ourselves drinking. Well either that or it had gone off in the sun, but we certainly struggled to get through more than one glass. Hey ho, shame about the wine, but we still had a feast to look forward to, so we chatted to a few people and I must say, the other guests were a really interesting mix. People of all ages, from all walks of life and who had travelled from as far as Canada, America and Australia to incorporate a night with Jim into their holiday plans. We spoke to a really nice elderly couple from the States who were regaling us with tales of their Parisian adventure. It's just a shame that Jim spent the entire evening glued to his stool rather than chatting and circulating with his guests. I know he's been hosting these dinners for over 30 years and his aim is to introduce strangers to one another, which he does with perfect flair, but I personally would've liked to have seen him interacting more. 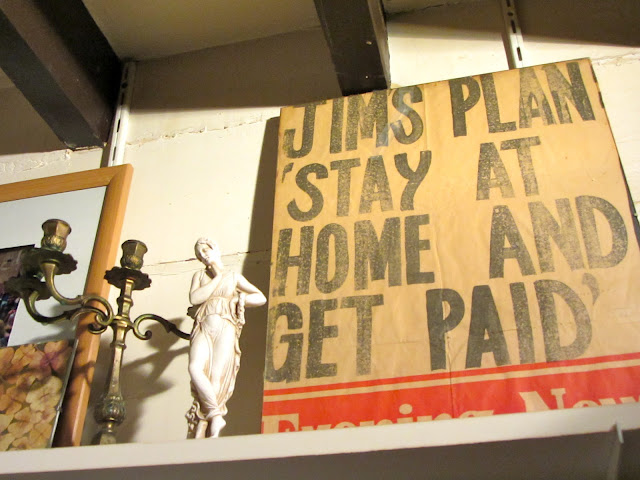 Diners were invited to help themselves to the starter, a bowl of vegetable soup. A tasty enough soup I'll admit, but still an unadventurous bowl of vegetable soup nonetheless. And perfect for washing down the Vin du Vinegar. Before long, it was time for the main course. Now I don't pretend to be a fantastic cook, but I can promise you that if I had to cater for 50 guests in my one bedroom flat in London, I could have absolutely produced something one hundred times more edible than the so called meal we were given. I think it was supposed to be a sort of fish stew served with rice and carrot salad. I like fish. But not when it's grey, mushy and riddled with bones. I managed a couple of mouthfuls but had to give up as I wasn't enjoying it all. Mum was equally disappointed and even our American friends who have been to Jim's before, agreed it was a real let down on the food front. I'm sure some of you are reading this and thinking what a fussy madam making such a song and dance about a below average meal! Please don't get me wrong, I wasn't expecting haute cuisine, but even a simple French onion soup, spag bol and a mousse au chocolat would have done very nicely. But this was seriously one of the most disgusting meals I've ever encountered and as far as I'm concerned, a total rip-off.  Jim doesn't actually cook the food himself each week, he invites a different person to do it for him. I think our 'chef' for the evening had to leave early for singing classes. Wise move. 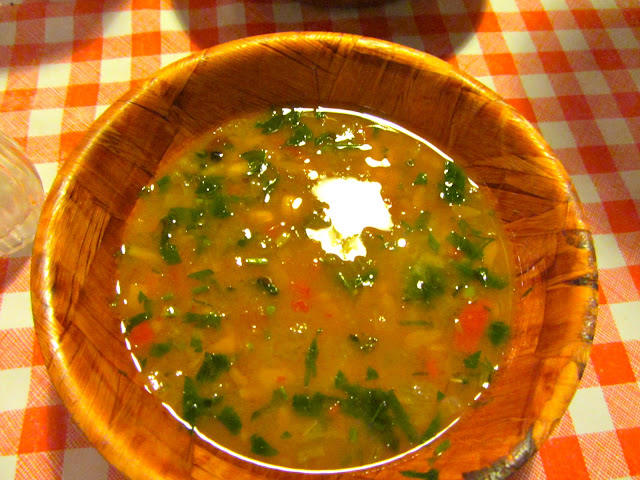 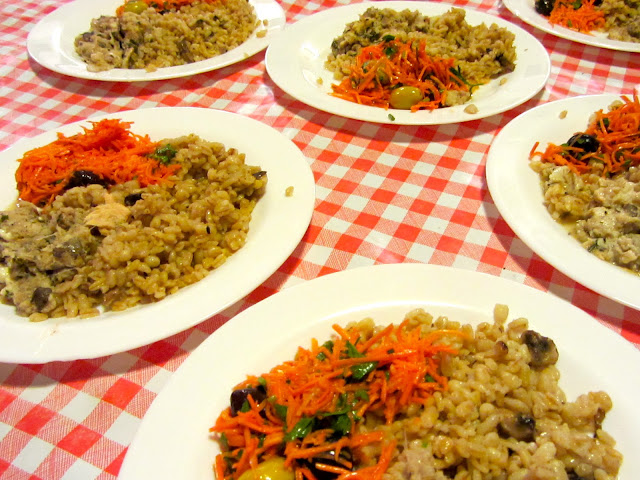 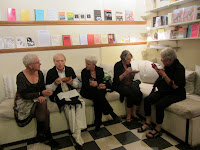 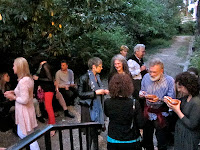 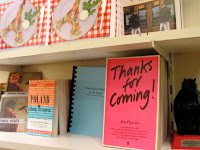 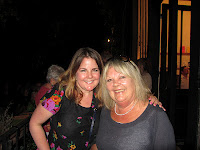 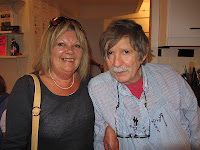 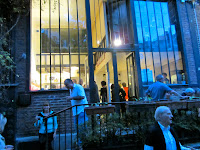 As mum and I decided to slip off early, we were given dessert to take away which was a slice of banana cake, and actually the best part of the meal. Still peckish, we escaped to a nearby cafe for a welcome Parisian nosh- up of steak frites and a carafe of red, which hit the spot perfectly.

I know this is a really scathing review and I apologise if I appear unkind, but this is based purely on my experience which as you've gathered, was sadly disappointing. Maybe we just had a dud night as I guess Jim must be doing something right if people are still going there after all these years. But if you ask me, I would skip Jim's and suggest you come to London if you want to check out some good supper clubs. There are loads of excellent ones which I can recommend where the food is fantastic, you can take your own wine, and the host finds time to chat to their guests.

Jim Haynes Supper Club
At his home in Paris
8pm every Sunday
€30 suggested donation per person
Posted by Missimmy at Monday, September 24, 2012

Well written and a good review Miss Immy...it's refreshing to read such honesty, more reviews like this would help to filter out the over-priced, over-rated, and over-hyped places such as this, well done x

Hi Miss Immy
I just wanted to say well done on your review of Jim's supper club - it can't have been easy to write a bad review and I'm sure that's not what you got into blogging for, but not everything can be amazing and you deserve total respect for giving your honest thoughts.
That's all!

And he doesn't have a word of french after all those years living in Paris...